Ahab’s Speech before His Crew: the Face of Falsehood (a Reflection on the Congress of the United States)
by William A. Cook 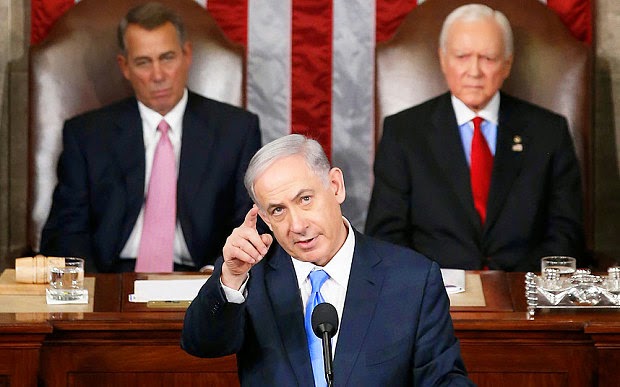 [Last week, the very day when Israel's Prime Minister, Netanyahu spoke before the American Congress, I was teaching Herman Melville's Moby Dick. In reflection it offered insight into the man, his mental state, and that of our Congress.
I submit to you, that you understand the depth of the crisis impacting the innocent. It is as though Melville prophesied the character of this man driven beyond reason to impose his will on the world, a hubris that knows nothing of those who must suffer his dementia. - Bill Cook]


“What is it, what nameless, inscrutable, unearthly thing is it; what cozening, hidden lord and master, and cruel, remorseless emperor commands me; that against all natural lovings and longings, I so keep pushing, and crowding, and jamming myself on all the time …” (Ahab in Moby Dick)


How fiction foretells the future, as the peoples’ Speaker brings his Captain to the podium to demand rebellion against their elected President, to exhort them to allegiance in his doomed quest to destroy yet another nation, to stand alone with him against the peoples of the world enticing them with fear and hate---rationalizing madness, obsessed with power, driven by hubris, twisted in his mind—a lone figure, with no position but the potential of reelection to govern a nation of six million, to dare to demand of the peoples representatives of this once great nation that they pay homage to him, obey him, to send their sons and daughters to yet another war for him, the leader of all the Jews who inhabit the earth.


What inscrutable thing, indeed, drives this madness, what horror dwells where a heart should live, what blindness blunts the reason that should govern those who govern that they surrender themselves to insanity? What have our leaders become that they grovel before a man who lives in hate, who thrives on an illusion of power, whose sole purpose in life is to use others to quell the fear that infests his being?

He like Ahab owns in his own demented mind the oceans of the world; he stands before the nations of the world united to condemn those he has judged in his sickness to be evil; and he assembles the Congress of the United States to damn their President’s attempt to stand with the leaders of five fellow nations to bring a modicum of peace to a strained portion of the world while he castigates all who would disagree with him.

“What is it,” Ahab asks of himself, “what nameless, inscrutable, unearthly thing is it that drives me?” It is, is it not, the absence of human sympathy for his fellow humans that sees in them his executioner, that feels no compassion for any who are destined in his mind to inflict their wrath on him, that his existence depends on constant, never ending, volatile vengeance to be inflicted when and where he must to salve the fear that festers within his being and drives him beyond the path of human toil, and effort, and love. Like Ahab he has lost his soul. He lives to use others to his end.

When will he, like Jonah, find repentance, and like Jonah cry out “I am a Hebrew, I fear the Lord the God of heaven who hath made the sea and the dry land” … and leave his deliverance to God, and be grateful for his punishment? How prophetic Melville’s sermon at the outset of Ahab’s mad voyage when Father Maple ends with this lament:


What then is the Almighty’s bidding? It is not to be the face of falsehood; it is to preach the Truth to the Face of Falsehood!