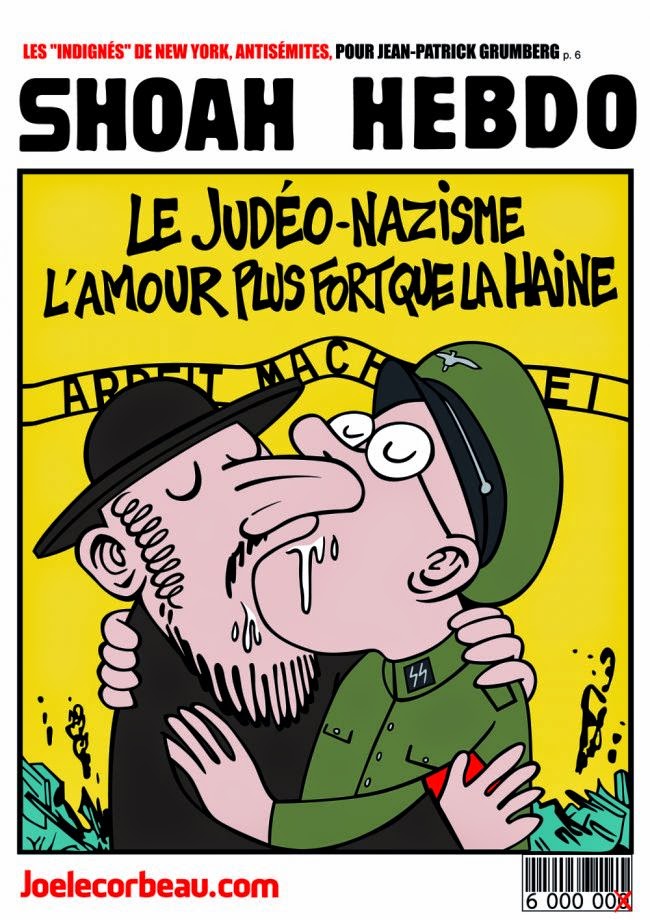 It is reported that a million people marched the streets of Paris today shouting “Liberté” and “Charlie”?1

Charlie who? Charlie Hebdo? Why would I want to align myself with cartoonists who show intolerance/prejudice to other cultures and religions?

I distance myself from adherence to ancient texts such as the Koran, Bible, and Torah. Nonetheless, a plurality of humanity subscribes to the word in these texts – but in differing degrees.

Muslims are not a monolith. There are sections of Muslims who are extremist in outlook and practice. However, the same holds true for Christians (witness the Crusades of past and present), Hindus (witness the toppling of the Babri Masjid by Hindu fanatics in India), Buddhists (witness the massacres of Tamils in Sri Lanka), and Jews (witness the genocidal massacres of Palestinians).


I have lived with and among Muslims. I lived two years in Jordan and found them to be, in general, most welcoming and kind. I just returned from 4 months in Egypt, where aside from taxi drivers who cheat the outsiders, the people were, by-and-large, very tolerant. I reject taking the brush of extremism2 and painting an entire swath of humanity with that same brush.

I also reject the killing of people to make a political/religious statement.

I am Free Expression/Speech. But Charlie Hebdo was not about either free expression or speech. It fired a cartoonist for alleged anti-Semitism, and was fined by the French High Court for doing so.3 For Charlie Hebdo, in other words, Islamophobia is okay, but Judeophobia is not okay. This is by definition hypocrisy.


France is not about free expression/speech. One is not free to challenge the Jewish Holocaust narrative in France. Literature professor Robert Faurisson was excoriated by the French establishment for his views challenging the Jewish Holocaust narrative, and professor Noam Chomsky became unpopular for his advocacy for free speech in the case of Faurisson. Chomsky held, “… it has been a truism for years, indeed centuries, that it is precisely in the case of horrendous ideas that the right of free expression must be most vigorously defended; it is easy enough to defend free expression for those who require no such defense.”4

If Charlie Hebdo is not about freedom of expression and/or speech, and if the French state is not about such, then what does it actually mean to say “Je suis Charlie”?


It is easy enough for anarchists and other progressives to state what they are. Most would say I am Free Expression/Speech. I am Tolerance. I am Peace. Charlie Hebdo and the French state are not about free expression and speech;5 they are not about tolerance (France, for example, does not tolerate the Muslim sartorial of the hijab having outlawed it). Neither are they about peace. If one pokes a stick into a hornet’s nest, could one believably claim to have peaceful intentions toward hornets? (With all due respect, the analogy is presented only as an argument to refute peaceful intentions on part of Charlie Hebdo and not to compare Muslims to hornets). France’s colonialism and its ensanguined militaristic forays into Muslim nations such as Iraq, Mali, Libya, Syria adduce its violent ontology.

Kim Petersen is co-editor of Dissident Voice. He can be reached at: This email address is being protected from spambots. You need JavaScript enabled to view it.. Read other articles by Kim.