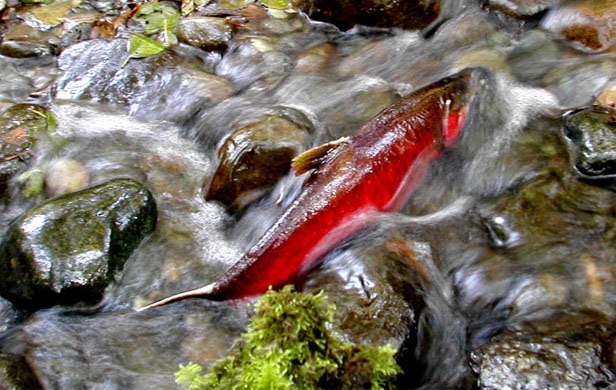 I come today in praise of the Vancouver Sun and trust that events don’t prove that I should’ve approached the mainstream media with my usual skepticism.
First, let me tell you a story from my early life which you may have heard and, if so, please bear with me.

Coho spawn in the darndest places

When I was a young lad, my friend Denis and I used to bicycle down to the Musqueam Indian reserve and fish two tiny creeks, one which we called Tin Can Creek, more properly known as Musqueam Creek.
With shiner lines, a tiny hook and a bit of worm, we would catch small cutthroat trout and, as with all young boys, rejoice at every second.
At Tin Can Creek, one day, a First Nations lad with a gaff came along, bent down over the edge and scooped out a fish which must’ve run 5 or 6 pounds at least. We were thunderstruck! If we’d known there were fish that size in the creek, it might’ve scared us out of fishing it!
Moments later, and a bit further upstream, the lad did the same thing. This taught me a lesson of a lifetime. These were coho salmon and this tiny creek contained their spawning ground.
For those unschooled in these matters, the coho salmon is the second largest of the seven Pacific salmon* which inhabit our waters, and in my opinion is the most beautiful; certainly it’s very sought after as a sports fish and considered a delicacy by those who like eating fish.
It must be noted that thanks to the careful stewardship of the Musqueam Nation, this run has survived and prospered – a rarity indeed in Greater Vancouver.
As I grew older and got more involved in fishing and later in governments dealing with fishing, I learned that the coho is unique in that it doesn’t spawn in great numbers in rivers and lakes but in small runs in tiny streams and even ditches all up and down our coast.

I learned too that the reason the coho was an endangered species in the Salish Sea area was loss of habitat due to agricultural practices and land development.

Farmers try to make a amends for habitat destruction


A front page article of Monday, December 29 in the Vancouver Sun tells how the paper’s “Minding The Farm” series – probing fish-bearing creeks on farms and activities by landowners which have damaged habitat – prompted some farmers to attempt habitat “remediation” on their properties.
One does not, unfortunately, gain the impression that the farmers are very enthusiastic about this program. To them, the creeks are no doubt a nuisance and very much get in the way of their normal farming activities. This is compounded, I’m sure, by the fact that some drainage ditches have even become spawning grounds.
The major culprit is waste. When this seeps into the creeks, it kills the fish, as simple as that.


Fish an “inconvenience” to farmers


Since I first learned of the problem it was obvious that farmers weren’t about to take a few fish in a creek seriously. They were no different than real estate developers who would report that there were only a “few fish” in the creek and therefore needn’t concern anyone.
The Department of Fisheries and Oceans has been extremely slow off the mark over the years and has hesitated to charge anyone. (This longtime observer smells political interference). One fisheries officer, quoted in the article, showed his frustration by asking:


"What does it take to get charged? You really have to try hard."

One stream at a time


The question is one of overall public good. While it doesn’t seem a huge sacrifice to allow a handful of fish to be killed in a stream, to accommodate agriculture or a new suburb, the aggregate of such losses is unacceptable. Therefore, the solution is a step-by-step, small stream by small stream business – hard to implement, even harder to enforce.
We quickly run into the phrases “remedial measures” and the weasel word of all, “mitigation”. I do not regard a culvert or a re-created stream as either remedial or mitigating. Nor do fish biologists.
The basic decision the public must make is whether it’s worth it to save these small runs of fish. The Vancouver Sun believes that it is worth it and I agree with them.


This question can’t be measured in dollars and cents – at least it ought not to be. One can always find a monetary reason to destroy things. The issue is, of course, monetary in the sense that progeny of these runs do supply sports and commercial fisherman, thus generating revenue – and it does cost money to preserve streams.
But can we, in all conscience, permit the destruction of salmon runs, however big or small, for any reason? Once we decide to destroy things for money, it is a slippery slope and we become cynics, for, as Oscar Wilde observed:

A cynic is someone who knows the price of everything and the value of nothing.


The Pacific Salmon is what identifies British Columbia the world over. I don’t think it goes too far to say that it is sacred – the soul of our province.
It gets down to this: If British Columbians won’t protect and enhance the symbol of what our lovely home is all about, who will?
*Chinook, Coho, Chum, Sockeye, Pink, Rainbow (Steelhead) and Cutthroat.