Speaking after the men’s release, Mr. Mujica “emphasised that Uruguay would not place restrictions on the mobility of the six men,” as the New York Times described it, “saying that their arrival with refugee status meant that ‘the first day they want to leave, they can go.'”
The Times also noted that, “When they arrived in Uruguay early Sunday morning, five of the men were taken to a military hospital for examinations. A sixth who was described as in more fragile health was taken to a civilian facility, Hospital Maciel, according to a report the Uruguayan radio station Monte Carlo.”


As the New York Times reported:

Mr. Hagel approved a flurry of transfers in late 2013, but in 2014 the process ground to a halt as he did not move on the Uruguay deal, nor on a proposal to repatriate four low-level Afghans and make other arrangements in the pipeline.

His reluctance to sign off on these agreements contributed to a deterioration in his relations with the White House. In May, President Obama’s national security adviser, Susan Rice, sent Mr. Hagel a memo pressuring him to pick up the pace, and Mr. Hagel, in an interview, explained that he was in no hurry to approve deals.
“My name is going on that document; that’s a big responsibility,” Mr. Hagel said at the time, adding: “What I’m doing is, I am taking my time. I owe that to the American people, to ensure that any decision I make is, in my mind, responsible.”
Recently, however, there has been movement on Guantánamo that is reassuring. Fawzi al-Odah, one of the last two Kuwaitis in the prison, was sent home a month ago, then five men — four Yemenis and a Tunisian — were given new homes in Georgia and Slovakia, and then a Saudi was repatriated.
136 men are now held in Guantánamo, 67 of whom have also been approved for release. The majority are Yemenis, still held because of a reluctance throughout the US establishment to overcome their fears about the security situation in Yemen. One notable prisoner still held is Shaker Aamer, the last British resident in Guantánamo, whose ongoing imprisonment is inexplicable, and last week I set up a new campaign, We Stand With Shaker, in an effort to secure his release.

The case of Abu Wa’el Dhiab


The best-known of the six men is Abu Wa’el Dhiab (ISN 722), a Syrian approved for release in 2009, who has been on a hunger strike because of his despair at ever being released, and who, as a result, has been force-fed. A father of three children — originally four, but one child died during his long years in US custody — Mr. Dhiab is in a wheelchair because of the decline in his health during 12 years in US custody, and he has, this year, been involved in a high-profile legal challenge against the US government.
Mr. Dhiab’s case was turned down in the District Court last summer, but revived after a favourable ruling in the D.C. Circuit Court in February, and in May, as I explained in a recent article:

[District Judge Gladys Kessler, in Washington D.C.,] briefly ordered the government to stop force-feeding Mr. Dhiab. This order was swiftly rescinded, as Judge Kessler feared for his life, but she also ordered videotapes of his “forcible cell extractions” (FCEs) and his force-feeding to be made available to his lawyers, who had to travel to the Pentagon’s secure facility outside Washington D.C. to see them. After viewing them, Cori Crider, his lawyer at Reprieve, said, “While I’m not allowed to discuss the contents of these videos, I can say that I had trouble sleeping after viewing them,” and added, “I have no doubt that if President Obama forced himself to watch them, he would release my client tomorrow.”


Mr. Dhiab himself said, “I want Americans to see what is going on at the prison today, so they will understand why we are hunger-striking, and why the prison should be closed. If the American people stand for freedom, they should watch these tapes. If they truly believe in human rights, they need to see these tapes.”
More recently, Judge Kessler — disappointingly — upheld the authorities’ right to force-feed Mr. Dhiab, and also granted the government a delay in releasing the videotapes, but Mr. Dhiab’s case has been a profound embarrassment for the authorities, and, as the New York Times reported, although Mr. Dhiab’s release “may make most of that case moot … a dispute over whether videotapes of the procedure must be disclosed to the public is expected to continue” — and other prisoners, still held, are also queuing up to challenge their treatment and to seek the release of videotapes.
Commenting on his release, Cori Crider, a director at the legal action charity Reprieve and one of Mr. Dhiab’s lawyers, said, “We are grateful to the government of Uruguay — and President Mujica in particular — for this historic stand. Very few people can truly comprehend what the cleared men in Guantánamo suffer every day, but I believe Mr. Mujica is one of them. Like President Mujica, Mr. Dhiab spent over a dozen years as a political prisoner. Mr Dhiab was never charged, never tried. President Mujica spent two years at the bottom of a well; for most of the past two years, Mr. Dhiab has had a team of US soldiers truss him up like an animal, haul him to a restraint chair, and force-feed him through a tube in his nose. The President’s compassion has ended that torture.”
She added, “Despite years of suffering, Mr. Dhiab is focused on building a positive future for himself in Uruguay. He looks forward to being reunited with his family and beginning his life again. Let’s not forget that Mr. Dhiab and the others freed today leave behind many men just like them: cleared prisoners warehoused in Guantánamo for years. Reprieve hopes that other countries will follow the positive example set by the Uruguayan government today, and help President Obama close this shameful prison.”

The stories of the five other men


The three other Syrians — Abdelhadi Faraj (ISN 329), described by the Pentagon as Omar Mahmoud Faraj, Ali Hussein al-Shaaban (ISN 327), described as Ali Hussain Shaabaan, and Ahmed Adnan Ahjam (ISN 326) — had been living together in Kabul, and, as I explained in my article in May, “were captured together crossing from Afghanistan to Pakistan in December 2001, along with another man, Maasoum Mouhammed, who was given a new home in Bulgaria in May 2010. Last year, Abdelhadi Faraj took part in the prison-wide hunger strike, and his account of that can be found here, and in February 2013 Ali Hussein al-Shaaban’s lawyer, Michael E. Mone Jr., wrote a brief article about his client’s plight for the Boston Globe. Also see here for an interview with David Marshall, the lawyer for Ahmed Adnan Ahjam, conducted in 2013 by The Talking Dog.”
As I explained in my book The Guantánamo Files in 2007, “The four men certainly matched the profiles of economic migrants, drifting from country to country in search of employment, and drawn to Afghanistan by its Arab-influenced reputation for welcoming Muslims from all around the world. They said that only seven people lived at the house (themselves, the owner, and two other Syrians), and that they all put money in to keep the place running.”
According to his account in Guantánamo, Ahmed Adnan Ahjam worked for a Saudi humanitarian aid charity, Ali Hussein al-Shaaban, who was just 19 years old when he was seized, came from a poor family in Syria and had been an ironsmith in his father’s store, and told his tribunal at Guantánamo that he went to Afghanistan because he wanted to move there to seek a new life, and Abdelhadi Faraj, who was just 20 years old when he was seized, told his tribunal at Guantánamo that he had been working at a store in Kabul, but that he planned to move on to Pakistan when a friend sent him money from Syria.
As I also explained in my article in May:

The Palestinian is Mohammed Taha Mattan (ISN 684) [described by the Pentagon as Mohammed Tahanmatan] who, like the handful of other Palestinians held at Guantánamo and subsequently released, is essentially stateless, as he can only return with the blessing of the Israeli government, which has no intention of allowing any former Guantánamo prisoner to return home. I most recently profiled his case here, mentioning how he was not only cleared for release by President Obama’s Guantánamo Review Task Force in 2009 … but had also been cleared for release under President Bush in October 2007. I also mentioned how, sadly, he was one of three prisoners that the German government was planning to accept in 2010, but was the only one left behind in Guantánamo when, for political reasons, a decision was taken to accept just two men instead.


The sixth man is Abdul Bin Mohammed Abis Ourgy (ISN 502), aka Abdul bin Ourgy, a Tunisian, who had been an Italian resident before he traveled to Afghanistan and was captured and sent to Guantánamo. He had apparently married an Afghan woman in 2000, and was first cleared for release by a military review board under the Bush administration.


In its coverage of the release of the prisoners, the New York Times noted, “The Obama administration hopes that if it can shrink the inmate population to two digits, Congress will revoke a law that bars the transfer of detainees into the United States. It would be far cheaper for taxpayers to house the inmates on domestic soil, and the White House argues that closing Guantánamo would eliminate a propaganda symbol for terrorists to use against the country.”
As I noted in an article last week, Congress has passed legislation preventing prisoners from being moved to the US mainland for many years (in the annual National Defense Authorization Act), and recently did so again. As a result, reducing the population by making sure that all the men approved for release are actually released is a good way for President Obama to argue that keeping Guantánamo open for less than 70 men is unjustifiably expensive.
That ought to be obvious, as should Guantánamo’s damaging role as a propaganda symbol. However, the prison — and the fate of those held there — has become part of a cynical game of political football, which not only costs a fortune and inflames tensions abroad. In addition, the existence of Guantánamo also causes inestimable damage to the US’s claim that it is a nation that respects the rule of law, and after nearly 13 years that terrible situation needs to be brought to an end. 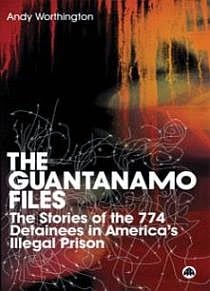 Andy Worthington is a freelance investigative journalist, activist, author, photographer and film-maker. He is the co-founder of the “Close Guantánamo” campaign, the director of “We Stand With Shaker,” calling for the immediate release from Guantánamo of Shaker Aamer, the last British resident in the prison, and the author of The Guantánamo Files: The Stories of the 774 Detainees in America’s Illegal Prison (published by Pluto Press, distributed by Macmillan in the US, and available from Amazon — click on the following for the US and the UK) and of two other books: Stonehenge: Celebration and Subversion and The Battle of the Beanfield. He is also the co-director (with Polly Nash) of the documentary film, “Outside the Law: Stories from Guantánamo” (available on DVD here — or here for the US).