In Ground-Breaking Ruling, US Judge Gladys Kessler Orders Guantánamo Force-Feeding Videos to be Made Public
by Andy Worthington 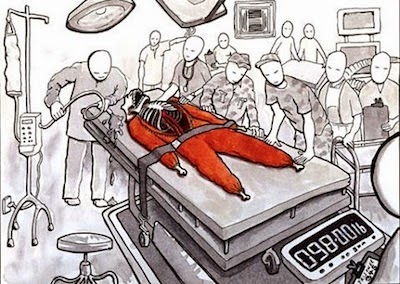 Congratulations to Judge Gladys Kessler of the District Court in Washington D.C., who, yesterday, followed up on a powerful order prohibiting the government from holding a secret hearing in the case of Guantánamo hunger striker Abu Wa’el Dhiab, which I wrote about here, with an even more powerful order calling on the government to prepare for public release eleven hours of videotapes showing Mr. Dhiab being dragged from his cell and force-fed.

This ruling is the latest in a string of powerful rulings by Judge Kessler, who, in May, briefly ordered the government to stop force-feeding Mr. Dhiab.
This order was swiftly rescinded, as Judge Kessler feared for his life, but she also ordered videotapes of his “forcible cell extractions” (FCEs) and his force-feeding to be made available to his lawyers, who had to travel to the Pentagon’s secure facility outside Washington D.C. to see them. After viewing them, Cori Crider, his lawyer at Reprieve, said, “While I’m not allowed to discuss the contents of these videos, I can say that I had trouble sleeping after viewing them,” and added, “I have no doubt that if President Obama forced himself to watch them, he would release my client tomorrow.”

In a press release, Reprieve explained that the eleven hours of video footage — consisting of 28 tapes in total — “is to be redacted for ‘all identifiers of individuals’ other than Mr. Dhiab,” and further explained how Judge Kessler’s ruling came in response to a motion submitted in June by 16 major US media organizations, including the New York Times, the Washington Post, McClatchy, the Guardian, the Associated Press and others, seeking to have the videotapes unsealed.

In a statement quoted in Judge Kessler’s ruling, Mr. Dhiab endorsed the request for the videotapes to be unsealed, stating, “I want Americans to see what is going on at the prison today, so they will understand why we are hunger-striking, and why the prison should be closed. If the American people stand for freedom, they should watch these tapes. If they truly believe in human rights, they need to see these tapes.”

In her ruling, Judge Kessler specifically made reference to the need for First Amendment rights to be protected with reference to Guantánamo, stating, “In short, it is our responsibility, as judges, as part of our obligation under the Constitution, to ensure that any efforts to limit our First Amendment protections are scrutinized with the greatest of care. That responsibility can not be ignored or abdicated.”

She also described the government’s justifications for seeking to keep the whole of the evidence on the videotapes sealed as a demand that is “unacceptably vague, speculative, lack[ing specificity, or … just plain implausible,” and added, “It strains credulity to conclude that release of these videos has a substantial probability of causing the harm the Government predicts.”

The Guardian noted that Judge Kessler countered another argument — that, if the tapes were made public, the prisoners “would learn how to develop ‘countermeasures’ to defeat force-feeding,” despite the fact that, in some cases, they have been force-fed for seven years — by noting that it “strains credulity.”

She also dismissed the government’s claim that releasing the videos would violate the Geneva Conventions because it would violate Mr. Dhiab’s right not to be held up to “public curiosity” by stating, “The Government’s claim, if accepted, would turn the Third Geneva Convention on its head. Rather than a source of rights to humane treatment, Article 13 would become a means to shield from public view treatment that Mr. Dhiab (and undoubtedly other detainees) believe to be inhumane.”

This is not the first time the authorities have invoked the Geneva Conventions, and the right not to be held up to “public curiosity,” to prevent knowledge about Guantánamo being made public. Media visitors to Guantánamo are permanently prohibited from showing the faces of prisoners when they take photos during prison tours, which has the effect of hindering the public’s ability to empathize with them.

Moreover, the ban on photos identifying the men held has been disturbingly thorough throughout Guantánamo’s long and ignoble history. A handful of photos have been released publicly after they were taken by representatives of the International Committee of the Red Cross and were subsequently released by the men’s families, but for the most part what we know to this day of what the prisoners look like, or looked like, has come from the Detainee Assessment Briefs, the classified military files that were released by WikiLeaks in 2011. However, none of the photos that have been released show the horrors of force-feeding, of prisoners weighing 100 pounds or less, which, if made publicly available, would invite comparisons with the Nazis’ concentration camps, and would, I believe, lead to action to bring about the prison’s closure.

It may be that the videotapes of Mr. Dhiab will perform this important function, and I certainly hope so.

The process of obscuring from the videotapes what Judge Kessler referred to as “all faces other than Mr Dhiab’s, voices, names, etc.” is “likely to take some days,” as Reprieve explained, adding that, while the redactions are made, Judge Kessler ordered the tapes to remain under seal. In the meantime, the hearing that I wrote about yesterday will begin on Monday (October 6), at 10am in Washington D.C. — unless it is delayed by an anticipated government appeal.

In response to the ruling, Cori Crider said, “It is high time the bright light of the truth was shone on Guantánamo’s force-feeding practices. It has always been the height of hypocrisy for the Guantánamo authorities to take media groups on ‘show tours’, while forbidding them from talking to prisoners or seeing evidence like this, which shows the grim reality of life at the prison. I look forward to the day when this evidence is made public, and I believe the outcry that results will hasten the close of Guantánamo Bay.”

Jon Eisenberg, who represents Mr. Dhiab in the US, said, “We firmly believe that once the veil of secrecy is lifted from the abusive treatment of hunger-striking prisoners at Guantánamo Bay, the abuse will end. This decision by Judge Kessler is a big step toward lifting that veil of secrecy.”

Alka Pradhan, of Reprieve US, added, “This may well be the most significant court decision on Guantánamo Bay in years. No longer does the American public have to rely on propaganda and misinformation, but can finally watch the videotapes and judge for themselves whether this terrible prison should continue to be the image America projects to the world, or whether we should reclaim our values and shut it down for good.”

Note: Please see here for the website of Lewis Peake, the artist who drew the illustration at the top of this article in 2008, as part of a series of five illustrations based on drawings by Guantánamo prisoner Sami al-Haj, which the Pentagon censors had refused to allow the public to see. Reprieve commissioned Lewis Peake to reproduce the drawings based on descriptions of what Sami had drawn, and I reproduced them in my article, “Sami al-Haj: the banned torture pictures of a journalist in Guantánamo.”

Andy Worthington is a freelance investigative journalist, activist, author, photographer and film-maker. He is the co-founder of the “Close Guantánamo” campaign, and the author of The Guantánamo Files: The Stories of the 774 Detainees in America’s Illegal Prison (published by Pluto Press, distributed by Macmillan in the US, and available from Amazon — click on the following for the US and the UK) and of two other books: Stonehenge: Celebration and Subversion and The Battle of the Beanfield. He is also the co-director (with Polly Nash) of the documentary film, “Outside the Law: Stories from Guantánamo” (available on DVD here – or here for the US).