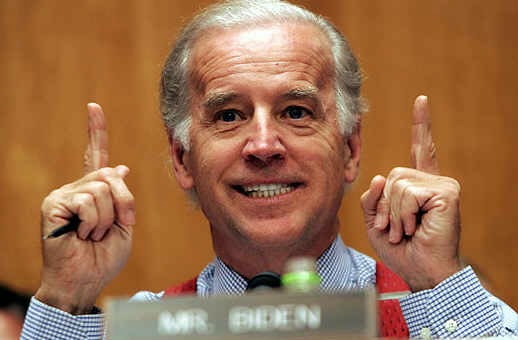 When Joe Biden gets candid, he really lets rip. The US vice president, speaking at the John F. Kennedy Jr Forum at Harvard University’s Institute of Politics, on Thursday told his audience – point blank – that America’s Sunni allies are responsible for funding and arming Al Qaeda-type extremists in Syria.

And he named names: Turkey, Saudi Arabia and the UAE, specifically. Others – like Qatar – are undoubtedly complicit too, but Biden’s comments were made off-the-cuff during the question and answer period following his prepared statement.

Of course, much of what Biden said has been suspected for years by Syria watchers, but to acknowledge this outright during the early days of President Barack Obama’s much-vaunted ISIL-busting Coalition – featuring these very same Sunni Arab partners – is a jaw-dropping concession.

But that’s not all. Biden also managed to fundamentally undermine his administration’s efforts to train and arm “moderate” Syrian rebels today, by claiming there is no “moderate middle (in Syria) because the moderate middle are made up of shopkeepers, not soldiers.”


Keep in mind now that just two weeks ago Congress approved – at the request of this White House – $500 million dollars to train and arm “moderate” Syrian rebels. Obama’s second-in-command is saying there are none of those, so who exactly are US forces teaching to fight with heavy weapons in Saudi training camps today?

Question: In retrospect do u believe the United States should have acted earlier in Syria, and if not why is now the right moment?

Biden: The answer is ‘no’ for 2 reasons. One, the idea of identifying a moderate middle has been a chase America has been engaged in for a long time. We Americans think in every country in transition there is a Thomas Jefferson hiding beside some rock – or a James Madison beyond one sand dune. The fact of the matter is the ability to identify a moderate middle in Syria was – there was no moderate middle because the moderate middle are made up of shopkeepers, not soldiers – they are made up of people who in fact have ordinary elements of the middle class of that country. And what happened was – and history will record this because I’m finding that former administration officials, as soon as they leave write books which I think is inappropriate, but anyway, (laughs) no I’m serious – I do think it’s inappropriate at least , you know, give the guy a chance to get out of office. And what my constant cry was that our biggest problem is our allies – our allies in the region were our largest problem in Syria. The Turks were great friends – and I have the greatest relationship with Erdogan, which I just spent a lot of time with – the Saudis, the Emiratis, etc. What were they doing? They were so determined to take down Assad and essentially have a proxy Sunni-Shia war, what did they do? They poured hundreds of millions of dollars and tens, thousands of tons of weapons into anyone who would fight against Assad except that the people who were being supplied were Al Nusra and Al Qaeda and the extremist elements of jihadis coming from other parts of the world. Now you think I’m exaggerating – take a look. Where did all of this go? So now what’s happening? All of a sudden everybody’s awakened because this outfit called ISIL which was Al Qaeda in Iraq, which when they were essentially thrown out of Iraq, found open space in territory in eastern Syria, work with Al Nusra who we declared a terrorist group early on and we could not convince our colleagues to stop supplying them. So what happened? Now all of a sudden – I don’t want to be too facetious – but they had seen the Lord. Now we have – the President’s been able to put together a coalition of our Sunni neighbors, because America can’t once again go into a Muslim nation and be seen as the aggressor – it has to be led by Sunnis to go and attack a Sunni organization. So what do we have for the first time?


The audio clip ends there. While you are taking a moment to readjust your worldview and re-categorize the ‘good guys’ and bad guys,’ do also note the veiled swipe Biden takes at former US Secretary of State Hillary Clinton whose recent book criticizes Obama’s Syria decisions while he is still a sitting president.

Before you allow Biden to transfer all blame for the radicalism in Syria onto the convenient Muslims-du-jour, consider for a moment the US’s role in all of this.

We have press reports that the CIA was a major conduit for the transfer of weapons from Libya to Syria – a role, no doubt, facilitated by US Ambassador Christopher Stevens who was killed in Benghazi by unknown extremists.

We are also told that the US assisted in the logistics of delivering a Saudi-bankrolled transfer of Croatian weapons in 2012 to Syrian ‘rebels.’ According to the BBC: “The CIA is also reported to have been instrumental in setting up the alleged secret airlift of weapons from Croatia. And here is The Telegraph‘s take on things:

“The shipments were allegedly paid for by Saudi Arabia at the bidding of the United States, with assistance on supplying the weapons organised through Turkey and Jordan, Syria’s neighbors.”


These weapons were later caught on video in the hands of Ahrar al-Sham, which today is a target of US airstrikes inside Syria. The New York Times goes further:

“With help from the C.I.A., Arab governments and Turkey have sharply increased their military aid to Syria’s opposition fighters in recent months, expanding a secret airlift of arms and equipment for the uprising against President Bashar al-Assad, according to air traffic data, interviews with officials in several countries and the accounts of rebel commanders.”

“From offices at secret locations, American intelligence officers have helped the Arab governments shop for weapons, including a large procurement from Croatia, and have vetted rebel commanders and groups to determine who should receive the weapons as they arrive, according to American officials speaking on the condition of anonymity.”
Exactly how does that exonerate Americans from delivering weapons to “Al Nusra and Al Qaeda?”

Biden’s comments on Thursday were a bombshell that will be heard across the globe. They will fundamentally undermine Obama’s attempts to arm “moderate rebels” and assemble a coalition that includes the very same Sunni Arab states that have helped create ISIL.

So what did the mainstream US media say about it? Nothing. Zip. Nada.

No – wait. There were headlines about Biden’s speech – let me be fair. But this is what CNN, ABC, NBC, CBS and Fox News pulled out of their collective hats:

CNN: “Joe Biden gets colorful on being a VP – and it rhymes with glitch.” This, a reference to Biden’s use of the word “bitch” in jokingly describing the job of a vice president.

CNN (again): “Joe Biden explains how Ebola is like ISIS.”

ABC: “This might be the best thing Joe Biden’s ever said.” Another reference to the ‘bitch’ comment.

Fox: “Biden on being Vice President: It’s a b-itch.” Kill me now.


Enough said. Washington’s partners in fighting extremism – and trampling all over international laws to do it – are the same ones who have fueled it. The Vice President of the United States just said so. And Americans are snickering over the B-word. Leaders of the free world indeed.