The Economic Scam of the Century
by Mike Whitney - CounterPunch 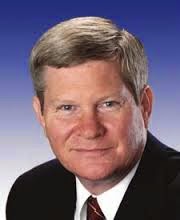 The gigantic giveaway to Wall Street would put US taxpayers on the hook for 90 percent of the losses on toxic MBS the likes of which crashed the financial system in 2008 plunging the economy into the deepest slump since the Great Depression.
Sen. Tim Johnson

Proponents of the bill say that new rules by the Consumer Financial Protection Bureau (CFPB) –which set standards for a “qualified mortgage” (QM)– assure that borrowers will be able to repay their loans thus reducing the chances of a similar meltdown in the future.
However, those QE rules were largely shaped by lobbyists and attorneys from the banking industry who eviscerated strict underwriting requirements– like high FICO scores and 20 percent down payments– in order to lend freely to borrowers who may be less able to repay their loans.

Additionally, a particularly lethal clause has been inserted into the bill that would provide blanket coverage for all MBS (whether they met the CFPB’s QE standard or not) in the event of another financial crisis. Here’s the paragraph:

If the Corporation, the Chairman of the Federal Reserve Board of Governors and the Secretary of the Treasury, in consultation with the Secretary of Housing and Urban Development, determine that unusual and exigent circumstances threaten mortgage credit availability within the U.S. housing market, FMIC may provide insurance on covered securities that do not meet the requirements under section 302 including those for first loss position of private market holders.” (“Freddie And Fannie Reform – The Monster Has Arrived”, Zero Hedge) 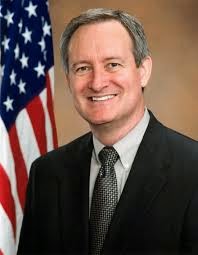 In other words, if the bill passes, US taxpayers will be responsible for any and all bailouts deemed necessary by the regulators mentioned above. And, since all of those regulators are in Wall Street’s hip-pocket, there’s no question what they’ll do when the time comes. They’ll bailout they’re fatcat buddies and dump the losses on John Q. Public.

If you can’t believe what you are reading or if you think that the system is so thoroughly corrupt it can’t be fixed; you’re not alone. This latest outrage just confirms that the Congress, the executive and all the chief regulators are mere marionettes performing whatever task is asked of them by their Wall Street paymasters.
Sen. Mike Crapo
The stated goal of the Johnson-Crapo bill is to “overhaul” mortgage giants Fannie Mae and Freddie Mac so that “private capital can play the central role in home finance.” (That’s how Barack Obama summed it up.) Of course, that’s not really the purpose at all. The real objective is to hand over the profit-generating mechanism to the private banks (Fannie and Freddie have been raking in the dough for the last three years) while the red ink is passed on to the public. That’s what’s really going on.

According to the Wall Street Journal, the bill will:

“construct an elaborate new platform by which a number of private-sector entities, together with a privately held but federally regulated utility, would replace key roles long played by Fannie and Freddie….”

“The legislation replaces the mortgage-finance giants with a new system in which the government would continue to play a potentially significant role insuring U.S. home loans.” (“Plan for Mortgage Giants Takes Shape”, Wall Street Journal)

“The Senate bill would repurpose the firms’ existing regulator as a new “Federal Mortgage Insurance Corp.” and charge the agency with approving new firms to pool loans into securities. Those firms could then purchase federal insurance to guarantee payments to investors in those bonds. The FMIC would insure mortgage bonds much the way the Federal Deposit Insurance Corp. provides bank-deposit insurance.”


Unbelievable. So they want to turn F and F into an insurance company that backs up the garbage mortgages created by the same banks that just ripped us all off for trillions of dollars on the same freaking swindle?

You can’t be serious?

More from the WSJ:

“Mortgage guarantors would be required to maintain a 10% capital buffer against losses and to have that capital extinguished before the federal insurance would be triggered.”


10 percent? What the hell difference does 10 percent make; that’s a drop in the bucket. If the banks are going to issue mortgages to people who can’t repay the debt, then they need to cover the damn losses themselves, otherwise they shouldn’t be in the banking biz to begin with, right?

This is such an outrageous, in-your-face ripoff, it shouldn’t even require a response. These jokers should be laughed out of the senate. All the same, the bill is moving forward, and President Twoface has thrown his weigh behind it. Is there sort of illicit, under-the-table, villainous activity this man won’t support?

Not when it comes to his big bank buddies, there isn’t. Now check out this clip from an article by economist Dean Baker. Baker refers to the Corker-Warner bill, but the Crapo-Johnson fiasco is roughly the same deal. Here’s Baker:

“The Corker-Warner bill does much more than just eliminate Fannie and Freddie. In their place, it would establish a system whereby private financial institutions could issue mortgage-backed securities (MBS) that carry a government guarantee. In the event that a large number of mortgages in the MBS went bad, the investors would be on the hook for losses up to 10 percent of its value, after that point the government gets the tab.

If you think that sounds like a reasonable system, then you must not have been around during the housing crash and ensuing financial crisis. At the peak of the crisis in 2008-2009 the worst subprime MBS were selling at 30-40 cents on the dollar. This means the government would have been picking up a large tab under the Corker-Warner system, even if investors had been forced to eat a loss equal to 10 percent of the MBS price.

The pre-crisis financial structure gave banks an enormous incentive to package low quality and even fraudulent mortgages into MBS. The system laid out in the Corker-Warner bill would make these incentives even larger. The biggest difference is that now the banks can tell investors that their MBS come with a government guarantee, so that they most they stand to lose is 10 percent of the purchase price.” (“The disastrous idea for privatizing Fannie and Freddie”, Dean Baker, Al Jazeera)


Just ponder that last part for a minute: “The bill would make these incentives even larger.”

Do you really think we should create bigger incentives for these dirtbags to rip us off? Does that make sense to you? Here’s more from Baker:

“The changes in financial regulation are also unlikely to provide much protection. In the immediate wake of the crisis there were demands securitizers keep a substantial stake in the mortgages they put into their pools, to ensure that they had an incentive to only securitize good mortgages. Some reformers were demanding as much as a 20 percent stake in every mortgage.

Over the course of the debate on the Dodd-Frank bill and subsequent rules writing this stake got ever smaller. Instead of being 20 percent, it was decided that securitizers only had to keep a 5 percent stake. And for mortgages meeting certain standards they wouldn’t have to keep any stake at all.

Originally only mortgages in which the homeowner had a down payment of 20 percent or more passed this good mortgage standard. That cutoff got lowered to 10 percent and then was lowered further to 5 percent. Even though mortgages with just 5 percent down are four times as likely to default as mortgages with 20 percent or more down, securitizers will not be required to keep any stake in them when they put them into a MBS.”


Hold on there, Dean. You mean Dodd Frank didn’t ”put things right”? What the heck? I thought that “tough new regulations” assured us that the banks wouldn’t blow up the system again in five years or so. Was that all baloney?

Yep, sure was. 100% baloney. Once the banks unleashed their army of attorneys and lobbyists on Capital Hill, new regulations didn’t stand a chance. They turned Dodd Frank into mincemeat and now we’re back to square one.

And don’t expect the ratings agencies to help out either because they’re in the same shape they were before the crash. No changes at all. They still get paid by the guys who issue the mortgage-backed securities (MBS) which is about the same as if you paid the salary of the guy who grades your midterm exam. Do you think that might cloud his judgment a bit? You’re damn right, it would; just like paying the ratings agencies guarantees you’ll get the rating you want. The whole system sucks.

And as far as the new Consumer Financial Protection Bureau, well, you guessed it. The banks played a role in drafting the new “Qualified Mortgage” standard too, which is really no standard at all, since no self-respecting lender would ever use the same criteria for issuing a loan or mortgage. For example, no banker is going to say, “Heck, Josh, we don’t need your credit scores. We don’t need a down-payment. We’re all friends here, right? So, how much do you need for that mortgage old buddy, $300,000, $400,000, $500,000. You name it. The sky’s the limit.”

No down payment? No credit scores? And they have the audacity to call this a qualified mortgage?

Qualified for what? Qualified for sticking it to the taxpayers? The real purpose of the qualified mortgage is to protect the banks from their own shifty deals. That’s what it’s all about. It provides them with “safe harbor” in the event that the borrower defaults. What does that mean?

It means that the government can’t get its money back if the loan blows up. The qualified mortgage actually protects the banks, not the consumer. That’s why it’s such a farce, just like Dodd Frank is a farce. Nothing has changed. Nothing. In fact, it’s gotten worse. Now we’re on the hook for whatever losses the banks run up peddling mortgage credit to anyone who can fog a mirror.

We’ll leave the last word for Dean Baker, since he seems like the only guy in America who has figured out what the hell is going on:

“In short, the Corker-Warner plan to privatize Fannie and Freddie is essentially a proposal to reinstitute the structure of incentives that gave us the housing bubble and the financial crisis, but this time with the added fuel of an explicit government guarantee on the subprime MBS. If that doesn’t sound like a great idea to you then you haven’t spent enough time around powerful people in Washington.”


The Johnson-Crapo bill doesn’t have anything to do with “winding down” Fannie and Freddie or “overhauling” the mortgage finance industry. It’s a bald-face ripoff engineered by two chiseling senators who are putting the country at risk to beef up Wall Street’s bottom line.

It’s the scam of the century.

Mike Whitney lives in Washington state. He is a contributor to Hopeless: Barack Obama and the Politics of Illusion (AK Press). Hopeless is also available in a Kindle edition. He can be reached at This email address is being protected from spambots. You need JavaScript enabled to view it..